You are Mikey, a chicken. You live on a farm with the Farmer. After attending a fair in Reality-on-the-Norm, the Farmer accidently left you behind when he went home. You need to find the way back to the farm.

Purity of the Surf

Josh Beachcomber has come to the town to participate in Reality's annual surfing contest. However, the contest costs money to enter and Josh is broke and deathly allergic to getting a job. Not to mention his surfboard has mysteriously disappeared. What's a beach bum to do? This game sports a number of nifty animations as well as your favorite RON characters in skimpy swimsuits! Woo-hoo!

The Postman Only Dies Once

The author of "Repossessor" is back with a second game, this one featuring his character Max Griff. Pete Bailey the postman has been murdered, and the only suspect is zombie Michael Gower. Help Max Griff, Reality's number one (and so far only) private eye as he tries to unearth the real killer. Charades, vats of acid, Mah Jong and donuts await your investigation!

This is a continuation of Creed Maley's and Denzil Quixode's epic trilogy. Become Drake once again as he struggles to survive in a Reality torn to shreds by ferocious kittens. This is the first chapter of the game (eventual total of three).

Here's a nice game with lots of interactions and optional bonus puzzles. Phil Nihilist the Yahtzeebrand store clerk has finally gained the incredible superpowers he always dreamed of. He becomes a superhero to help the people of Reality. However, Phil recieves a threatening phone call from DC Comics.... 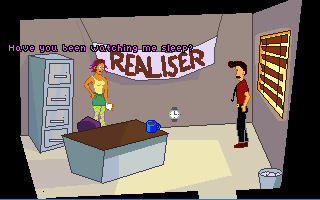 Another mayoral election is about to take place, and Michael Gower has been thrown in jail again. Become Mika once more as she seeks to blow the lid off the scandal and uncover more stories for the newspaper.

Grundislav, creator of the Hooky McPegleg games, returns with his third(!) RON game. This time, we meet a new character: Chef Lucca. When the mayor is forced to shut down Lucca's Italian restaurant due to a complaint from D.O.R.K.S. (Department of Restaurant Kitchen Sanitation), the chef suspects someone is out to get him. Help Lucca and his naked brother Guido uncover an evil conspiracy.

This game was written for the March 2003 monthly games contest. Davy and Elandra are trapped on an alien world. The jury is out on how they got there. Did Elandra's new invention go horribly wrong? Or did Davy's magic cause havoc again? Regardless, it's up to the both of them to find a way back home.

Melt and Drake return in this follow-up to the great "Cabbages and Kings." This time, the duo teams up with Doc and Mika to foil Baron Wolfgang's evil plot in an adventure complete with flashbacks, time travel, and yes, talking animals.

Mika, a student photographer, arrives in Reality, seeking a picture of Cosby's mangled corpse to sell to the tabloids. Graphically innovative, and it even has some replayability, because of the different pictures it's possible to take.